This is one part of a series dedicated to the question "why is Anarcho-capitalism a bad idea?".

History tells us that in an almost linear fashion humans always opted for more security in exchange for less freedom. This makes sense, considering that almost all of our ancestors dedicated most of their time to ensure their survival. Within an evolutionary context, security was the highest good, security seeking individuals were rewarded by becoming old enough to reproduce. Freedom on the other hand was the bane of our existence as a caveman. Being free of any social and tribal commitments but also deprived of any inherent benefits meant certain doom in the cold winter.

Societies grew ever larger from families, to tribes, dynasties, kingdoms, nations and supranational unions. Each step in the evolution of the social structure brought more responsibilities upon the individual and complicated and expanded the bureaucratic effort for keeping the social structures working. One could argue that at some point the costs of such an expansive social structure (with ever more members) would soon outweigh the potential benefits. Why haven't we seen a stop in the expansion of theses social structures and retained social structures in the form of - let's say - feudal dynasties? Where tribes and families were free to set their own rules? Simple economic models would argue that transaction costs can be reduced within a larger, unified economic framework, that larger social structures provide (ie. efficiency gains by only needing to fulfill one set of standards rather than several or enabling more competition by reducing customs duties). However simpler social structures wouldn't necessarily mean that product standards or customs would be imposed at all, individuals could freely choose to engage in a more liberal market if they wish too, without requiring a binding framework akin to a nation state. Hence an argument purely based on economic efficency might be difficult to make against anarcho-capitalism.

However there are other, more fundamental reasons for growing social structures. They can't be explained within the concept of an absolutely rational individual which only seeks their own material self-interest. But they can be explained by the preference relations of humans. Preference relations describe the preference of one good over another (good 1 ≻ good 2) or the indifference between two goods (good 1 ∼ good 2) (1). These goods can be anything, from sugar, to spirituality or physical integrity. As we've seen the economical argument against smaller social structures is difficult to make, so we leave aside the material goods for now. Instead let's focus on two intangible goods, which are fundamental for the well-being of every individual: Freedom and security. 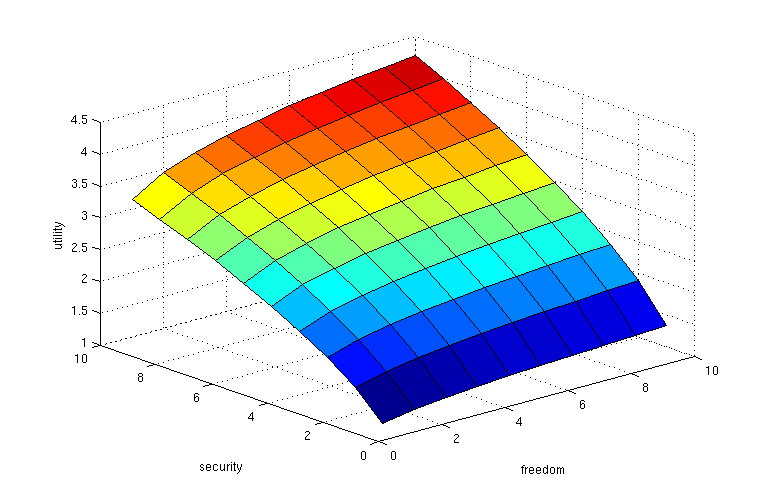 My hypothetical figure on security and freedom contribution to utility. Values are merely for illustrative purposes.

Two questions, which good (freedom or security) do humans value more? And which of the two goods is favoured by a larger social structure (and vice-versa)? I would argue that by answering the latter question and observing in which direction societies in the world are changing, we can answer the former question (which good do humans value more?). I claim that security benefits from larger social structures and my argument is as follows: Security by and large depends on the power of whichever entity enforces the rules. And this power becomes stronger when the social structure that acknowledges or funds this entity grows (ie. more funds give an entity that enforces security more power). And secondly it depends on how encompassing any punishments, penalties by the enforcer are - the larger a social structure is, the more areas (mostly geographically but also in terms of regulated activities) can be leveraged as punishment for an individual. A practical example: The European Union can enforce much more damaging penalties to companies than a single state, because it can limit access to much more potential customers and hence it's bargaining power rises. Similarly a military alliance such as NATO can deter a foe much more effectively than a single state within the alliance. And as such the alliance strengthens the security within the alliance. Furthermore a very large social structure might offer the same minimal security guarantees to all members of that society, regardless of their wealth (the social structure takes on a classical redistribution function with regards to security). This obviously benefits the poor (relatively more security) and disadvantages the rich (relatively less security) - however it guarantees every member of the social structure a minimal amount of security. This guarantee of a minimal amount in security is critical for the perception of security. One cannot really feel secure if his security depends on his ability to pay for security services. Because wealth fluctuates during the lifetime so would the amount of security a person enjoys. In other words, one would only be as secure as his wealth, which to most people would be akin to insecurity.

We currently observe that such structures are on the rise (NATO and EU expansion to name a few) and can hence conclude that humans prefer security over freedom. If this wasn't the case, more people would protest and demonstrate against the further expansion of these social structures - assuming that humans are perfectly rational individuals and prefer freedom over security. Since this isn't the case humans either prefer an all encompassing social structure that ensures (to some minimal extent) their security or humans are not perfectly rational individuals that try to optimize their own utility. And I heavily doubt the latter.

But there are more explanations which speak for the expansion of social structures. For example the closely related cousin of security: Risk aversion.

As nicely demonstrated in the video above, humans are on average fundamentally risk averse. However great breakthroughs in economic or scientific endeavours often require undertaking a copious amount of risk. Ie. a researcher seeking a new drug could spend years of his lifetime researching thousands of different components and their combinations to find a cure, without ever being successful. In a small society such an undertaking would most certainly be very risky, because the individual would be unable to produce value and would place a heavy burden on other members of the society. This is true regardless of the size of the relative social structure, but the larger a society is, the easier it is to compensate for one individual. Hence within a smaller social structure the risk of becoming a burden on society is much higher than within a large one. A risk averse individual might hence choose to rather work in accordance with the rest of society. Even though the potential benefits (if the researcher succeeds) would far outweight any reduction in productivity caused by the absence of a single individual. As a result larger social structures benefit risky endeavours such as research or exploration which would not be affordable within a smaller society which can't afford productivity losses. The fundamental problem here is that there's no way to accurately predict probabilities of success and the value of success for such endeavours. How can we quantify the benefits for society of the successful Apollo programs? What value do the discoveries by Galilei carry? Could there ever be a for-profit-company which invests in researching nuclear fission (and the resulting atomic bombs and nuclear reactors) that can keep their share- and stakeholders satisfied through years of expensive failures? There's certainly a chance, it's just a very low one.

One last intangible good we need to look at is fairness. There is a growing consensus amongst economists that an individual is not "exclusively pursuing their material self-interest and do[es] not care about ‘‘social’’ goals per se" (0). 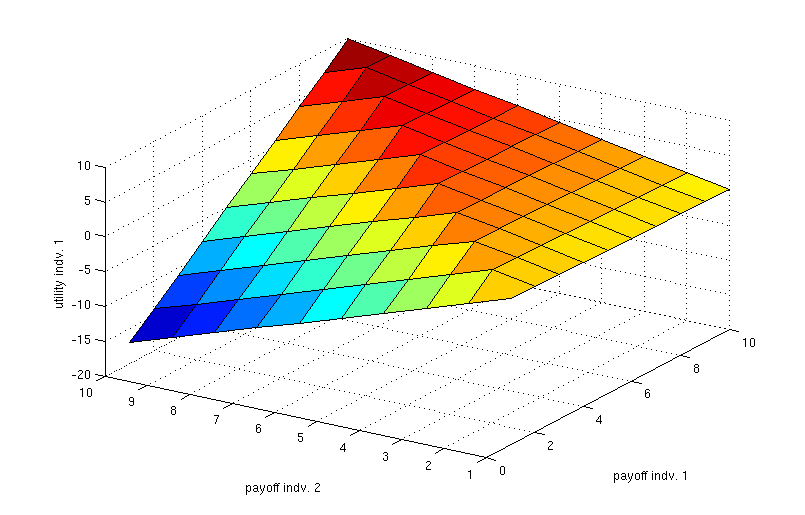 Matlab code for Fehr-Schmidt (1999) utility function in a two person case and a general function for any number of individuals.

Humans take great interest in the well-being not just of themselves, but also their respective peers. Hence it is no surprise that for evaluating the total well-being of a society the income and wealth disparity has to be taken into account - which is already widely done with the so called Gini-coefficient. It calculates the income disparity within the population, which is considered fundamental for the happiness within a social structure. In their 1999 paper "A theory of fairness, competition, and cooperation" (0, p. 822) Fehr and Schmidt propose a simple utility function for multiple individuals, which each receive a different payoff. As the surface above implies the utility within a society is maximized when everybody receives the same payoff (in the case of two individuals above). Receiving a much lower payoff than most other individuals results in a strong reduction of utility while having a much higher payoff than everybody else also causes a reduction of utility (albeit probably not as strong). Hence humans by and large prefer lower disparity within income. Now it must be cautioned that this argument can easily be abused to call for an equal pay to each individual. However this is not what the model attempts to portray. Rather than describing absolute monetary payoffs the model describes payoffs relative to the outcome produced by an individal - hence absolute payoffs can still vary. Fehr and Schmidt mention a study by Loewenstein, Thompson, and Bazerman (2), which shows that humans greatly dislike income disparities within relevant reference groups.

Now the larger a social structure is, the more it can influence the formation of justified incomes. Within a very small society income disparities could largely prevail, because one social group cannot take any influence the income of any other group. This wouldn't be a problem if persons within one social group would only compare with members of their own group, which is unlikely. The formation of different wages for equal work is largely prohibited if competition is present. However there are many potential markets where competition is not ensured. For example in the case of natural monopolies, for example if one family controlled a precious oil field. While the market might dictate the price for oil, the family would likely still be disproportionally rewarded for the extraction of oil and couldn't be appropriately taxed for the additional income. The same argument holds for a landlord which owns a large amount of housing space within an area. Such discrepancies between income and effort can cause serious discomfort within a society and caused the fall of many social structures (French monarchy, East India Company) which were regarded as beneficial only to a limited set of people.

In conclusion: Human preference relations cause societies to organize in a way which is opposed to the classical ideals of anarcho-capitalism. While an economic advantage in a fully liberalized market might be achievable, the preference relations of the average human make it very likely that an anarcho capitalist organization of society would be less preferable for most people.

(1) there's also the "at least as preferred" operator ≿