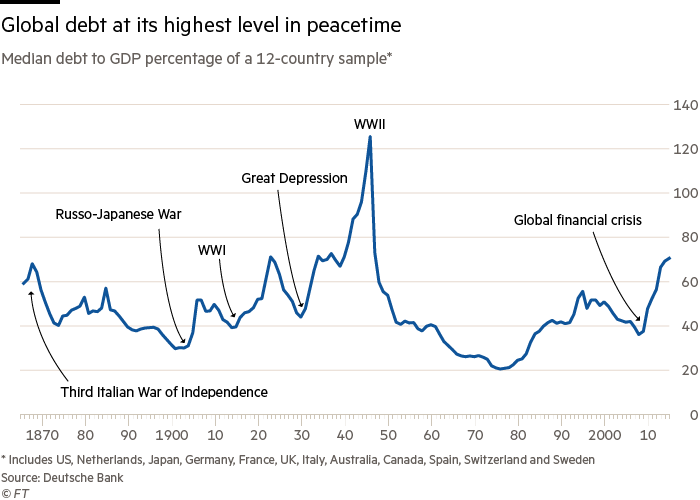 Above figure shows that countries have already taken on a (near) record amount of debt. Still inflation has remained very low and economic growth anemic while wealth inequality is still on the rise.

Central Banks like the ECB, the Fed or the BoJ have tried to step in and rekindle economic growth with massive interventions in financial markets (so called QE: Quantitative Easing). Primarily by buying government bonds, mortage backed securities and even equity ETFs in the case of the BOJ. The (simplified) explanation is that buy buying bonds borrowing costs for companies can be reduced, or by buying equity ETFs, that fund raising through the public market becomes easier for companies. Thereby lowering their cost of capital and allowing them to spend more on wages and increase capital expenditures.

However the low economic growth over the past ten years has clearly shown that this is not working. The reasons for this are manifold but one of the main drivers is that most people are evidently not consuming more and this is in part because they don't earn more. Lowering the cost of capital has mostly enriched prior shareholders and bond holders. Companies use the lower interest rates to buy back shares and replace callable bonds with lower yields (ie. debt restructuring).

Normally companies would use additional cash to invest it in more production facilities or compete for better workers, however in the current economic environment there's simply not enough opportunity for these investments to pay off. So instead the central bank money is used to lower their own cost of capital by passing that money on to investors. The net effect is little change in the economy itself and mostly a change in valuation.

However this is not the entire story. Some of the money does indeed end up in the labour market. Most notably record low yields lead to more risk affine investor behaviour and a prime example of this is venture capitalism. So most of the new jobs that QE has created were high risk startups. The recent round of unicorn valuations were not due to a round of major technological breakthroughs in various scientific domains but rather simply an effect of vast sums of money seeking an investment.

When the market is in charge about where all this influx of money is going to be spent on, then it's not going to be spent to scale up traditional industries. It will be spent there to lower future capital expenditures, but no more. On the contrary, the money will much more likely be spent on new and disruptive industries, which have a high growth potential through the usage of new technologies. Often these new ventures are not creating new markets themselves but are rather competing in existing markets. A prime example is Uber, which attempts to use smartphones for a global ride and transport (brokerage) platform. It does this as a competitor to the traditional taxi and food delivery drivers (thereby lowering their margins). Of course when prices are becoming lower, the market might also grow in size since it becomes accessible to more consumers. Still, this example shows that QE not only increases wealth disparaties by benefiting prior holders of financial assets, it also actively sponsors companies that disrupt traditional industries. In those traditional industries both owners and employees will equally carry reductions in wealth and pay or even a loss of their job for the latter. QE leads to a double whammy for low and median wage workers with little savings.

If these effects are not taken into account and remedied, we risk that a populist wave will indiscriminately blame free market economics for this inequality. Now should be the time to reconsider which toolsets central banks can use and what their exact mandate should be.

Since the start of 2013 when I first started trading Bitcoins I've had my fair share of both good and bad experiences with Bitcoin exchanges. A new, global and unrestricted financial system is currently being bootstrapped and the centralized exchanges are still its weakest link. The missteps of exchanges like