I recently got my hands on a book by Daniel Kahneman called "Thinking Fast and Slow". In great detail Kahneman (btw. winner of the 2002 Nobel price in economics) outlines the two apparent systems of our mind, notably system 1 and 2. System 1 being the primal, quickly thinking part, which helps us recognize facial expressions, spatial dimensions, etc. and system 2 (the cognitive, deliberately thinking part) which kicks into gear when we're supposed to tackle more difficult tasks such as solving equations or other mental tasks. If you want to know more, AsapSCIENCE made a nice video explaining the two systems in detail [1] or read the actual book.

In his book Kahneman also described a short mental exercise to kick your slow thinking system 2 into full gear. He called it Add-1 . The exercise is really just a simple addition of each number. So if you have a number like 3967, the solution would be 4078. Pretty straight forward, huh? The task gets a bit more challenging when you have to keep a steady rhythm and add a 3 instead of 1 (then called Add-3). Kahneman suggested writing these numbers on a bunch of flash cards and reading them aloud while listening to the steady beat of a metronome. Instead of wasting a few flash cards, I thought this would be an exercise which could be much easier carried out on a smartphone and hence the slow thinking trainer was born. 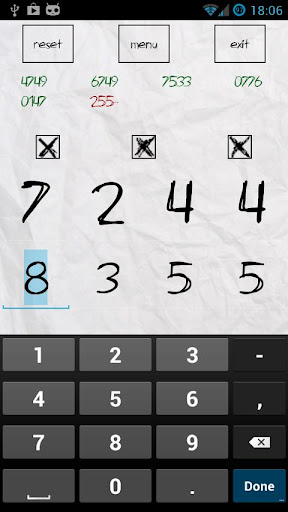 As you can see, the main screen contains two rows for numbers, the upper containing the random numbers and the lower one your answer. The three squares are acting as some sort of visual metronome (though sounds are also included), counting steadily four/fourths. Over the short course of using the app, it was quite interesting to see how quickly you get better at adding random numbers. Granted, these effects on the cognitive abilities of your brain might be quite limited but the app might at least help you training and deepening your focus for a couple of minutes.

If you got any suggestions or requests for features feel free to leave them in the comments or drop me an email.