Two very different countries tell a very similar story in the 21st century. The dusty, barren UAE, with a predominantly muslim population on one side and the temperate, fertile Poland with a mostly catholic population on the other - what could those two countries possibly have in common? 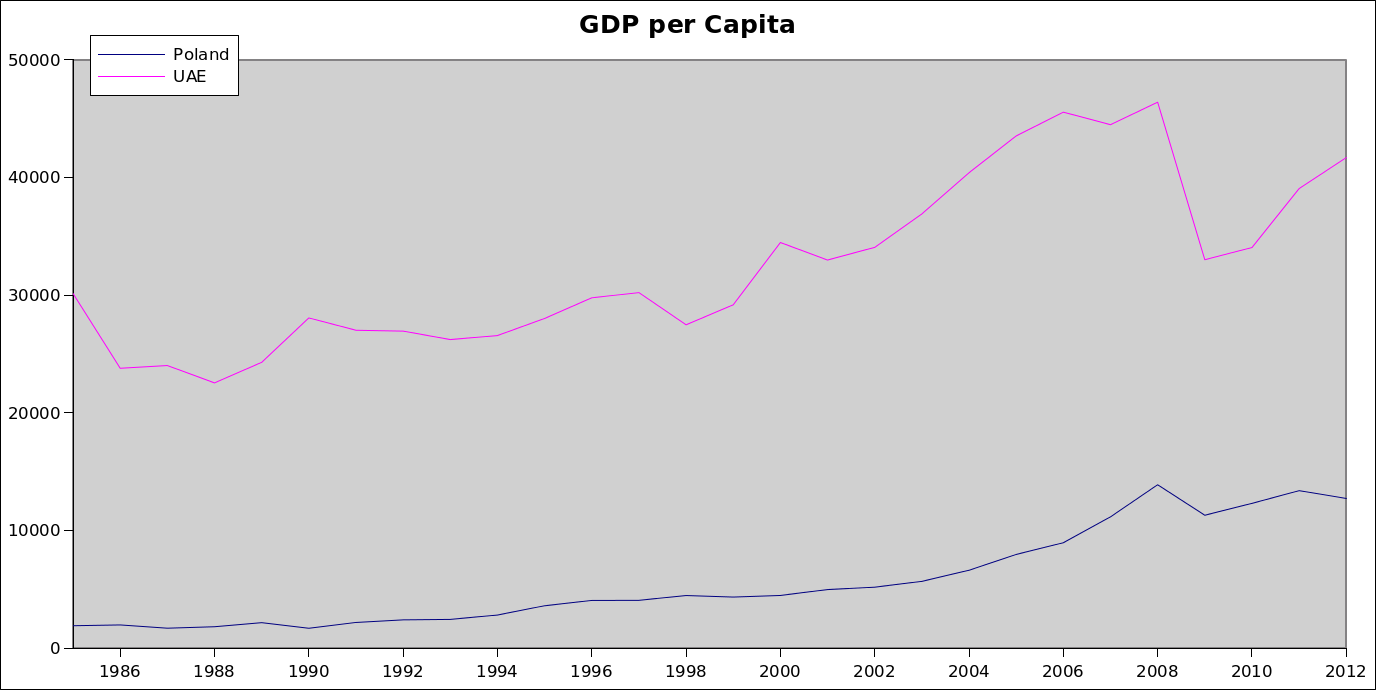 As we see in the graphs above (GDP per capita, measured in current US$ - unfortunately I could only find a limited dataset available for PPP adjusted statistics) both Poland and the UAE enjoyed a considerable economic growth in the recent past. The reasons for that spurious growth are very different for the two economies: Poland stepped out of the iron curtain and joined the EU whereas the UAE profited from rising oil prices and very liberal economic policies.

While their economic growth certainly benefitted their respective populations with increasing standards of living, the effect of their economic prosperity was probably even bigger abroad. Not because bordering countries would benefit from increased trade but because both countries stood out like a shining beacon of what liberal capitalism and functioning governments can achieve. Citizens of run down countries in the Middle East bereft of their potential by centuries of sectarian violence and decades of corrupt regimes suddenly looked with astonishment towards the UAE. A country consisting of nothing but oil and sand was suddenly building skyscrapers which put other cities in the west to shame, had declining [illiteracy rates][1] and became a safe haven for foreign investors amidst a region of turmoil. As differences between the UAE and the rest of the Middle East kept increasing citizens of other countries became more and more discontented with their own government. The UAE seemed like a living proof that a better society was possible in the Middle East, without relying on [ultra close ties to the west][2]. And as discontent grew, so grew the hatred towards their own government, a seemingly more and more incompetent regime, without legitimate power and a very poor track record.

It is this background which really puts the Arab Spring into perspective. Fueled by the new communication possibilities of social networks, this discontent grew into outright rage against the government and created revolutionists seeking the establishment of a country according to their own ideals (it goes without saying that a lot of these revolutionist ideas were more reactionary than anything else).

Poland's story is similar. Once an impoverished republic under Soviet rule, Poland quickly catched up with other European countries and became the envy of many eastern citizens. Particularly interesting in this context is Ukraine. Ukrainians - once used to looking down on the impoverished Poles - were suddenly starting to think of their home as a backward nation at the fringes of Europe. Once the proud home to some of the most important Soviet rocket programs in Dnipropetrovsk now had nothing more to show than a run down mining sector in the east, corrupt politicians in the west and gas shortages across the country. The tables turned after the fall of the iron curtain: Poland's government pushed for reforms, liberalized the legislation and reduced corruption - trimming the country for economic growth inside the newly formed free market of the European Union. Ukraine at the same time held on dearly to its historical ties with Russia and was shaken up by more than one political crisis in its short time of indepence. Abandoning the association agreement with the European Union by a Pro-Russian government was the last drop into an overflowing barrel. Young Ukrainians saw their chance for a betterment of their living standards and an economic rise à la Poland slipping away and they flocked to the streets, reminiscing about the Orange Revolution and maybe their brothers and sisters in spirit in the Middle East.