September 17th 2011 saw the rise of the occupy movement in New York. Similar movements took place all over the world in the following months. The demands and issues raised by the protesters varied greatly and the "occupants" were far from a homogeneous group. Demands ranged from the introduction of a Robin Hood tax, to a ban on high-frequency trading or an arrest of all 'financial fraudsters' [0].

My interpretation of those events is that members of liberal societies have rising concerns about the following issues: increasing financial inequality, increasing demands at work and uncertainty about continuous employment, increasing social pressure for conformity and lastly conflicting and hard to fulfill role models for both sexes. These concerns manifested themselves in the undifferentiated protests during those months (among other concerns which won't be mentioned here) and seem like a sign that not everybody is happy with the current state of liberal societies.

The trend of rising inequality among developed as well as newly industrialized countries seems one of the most common features of very liberal and economies. 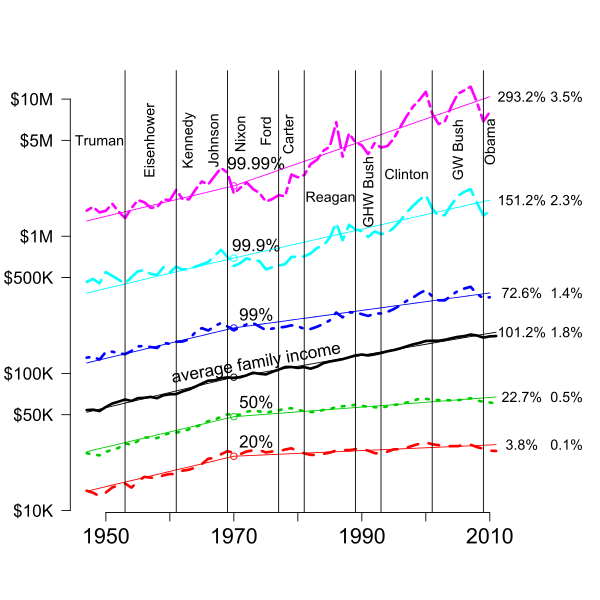 The current development in capitalist liberal economies seems unavoidable. Because efficiency gains mainly benefit the owners of private corporations (which in turn account for the largest part of the gross national product), the average member of such a society profits marginally less. A state run redistribution could easily offset those inequalities in income distribution, however since there's a fierce competition among nations for attracting new businesses and fostering economic growth, such plans are usually heavily criticized [2]. If increases in taxes are done isolated in one country, there's a real risk of loosing businesses and offsetting any benefits of a redistribution. In summary, the level of state enforced redistribution of wealth stands in opposition to economic interests if done on a national level.

increasing demands at work and uncertainty about continuous employment

Technological advancements in the later part of the 20th century have radically transformed many industries (and continue to do so). Especially the ubiquitous rise of computers have in mild cases just redefined the working environments ( eg. accountants) and in other cases almost eradicated traditional industries ( eg. travel agencies). Technological advancements show no sign of slowing down and the required skill sets for a job are changing faster than ever. Working in the same function from career start to end has become more and more unlikely in the majority of all industries. As a result of these rapid technological changes, staying employed has become much more uncertain today than in the past, regardless of the state of the economy. In summary: All employees are now forced to continuously either improve or learn new skills in order to retain employment.

Note: Pictured is the percentage of people taking part in continuous education in east and west germany from '79 to '03 (from Rolf Becker and Anna Etta Hecken, p. 383) [5]

Progressive societies have in the past 100 years continuously changed their role models and replaced historic morals and social conventions with their own ideals. We could mention the ban on apartheid, equality for women, gay rights and legalization of recreational drugs. One of the results of this abandonment of traditional societal conventions appears to be rising anxiety and insecurity among the population. With few conventions ready to fill the void, society falls in a cycle of constant self reflection, constantly challenging their own conventions and behaviors. This puts every member of a society under scrutiny and forces every individual to continuously improve their own appearance towards the relevant peer group, which in itself is constantly changing its respective conventions and ideals. On top of that, the rise of social networks allows the immediate exposure of every individual to its whole peer group. This is creates another and paramount channel through which individuals interact with each other and demands further refinements of social behavior and conventions - primarily because interactions on social networks are visible to the peer group in real time, usually irrevocable and much more frequent than any previous form of communication. In summary, being socially acceptable has become more stressful in the 21st century.

conflicting and hard to fulfill role models for both sexes

In the past 50 years the rise of feminism, the availability of contraception and the liberalization of marital law have greatly changed the relation between the sexes. The traditional family model is no longer the desired form of living for many couples. Women are increasingly attaining previously male dominated professions, acquiring equal or superior education and expected to follow the same career paths as men. While the full equalization of working environments for women is an ongoing struggle, these changes conflict with the traditional family model, which expects children to be raised at home by at least one parent. However nowadays both parents are expected to seek continuous employment. Again if only some individuals perform part time work at a company, then this puts them at a clear disadvantage with regard to their colleagues.

On top of that, liberal societies have done little to transform very old role models. Many aspects of traditional role models still persist to this day but have now become harder to fulfill than ever. The rise of feminism and women rights has surprisingly done little to substantially change ideals among women. The ideal of beauty seems to be as prevalent as ever and continues make the relation women have with their bodies a very stressful one. Men on the other hand have done little to adjust their ideals and keep reinforcing those traditional qualities that they perceive as most desirable in women. Furthermore, the male dominance is a persistent trait in most relationships and a silently and deeply ingrained requirement in any quest for a future partner.
Deborah Prentice and Erica Carranza compiled an insightful guide about desirable stereotypes about men and women back in 2002 [4]. One undesirable quality of men (as seen by women) is for example to be yielding (4th among intensified proscriptions), whereas the most undesirable quality of women according to men is being "rebellious" (p. 273).

These traditional expectations for a relationship appear to have survived other social changes in the past nearly unscathed and now stand in clear conflict of conventions which demand equality. Prentice and Carranza share a similar notion in this quote (p. 275):

As women have moved increasingly into the workplace, they have taken on additional, nontraditional roles. To perform these roles, they need to demonstrate many of the traits that the prescriptive female stereotype deems less important for them than for others — to be highly intelligent, efficient, rational, to have common sense, and so on. However, because they have not entirely given up their feminine roles, they need to demonstrate traditionally feminine characteristics as well. Descriptive stereotypes, as indexed in this study by typicality ratings, reflect this current state of affairs. Women areseen as having the qualities prescribed (and not the qualities proscribed) by their traditional gender roles, and also as having the qualities needed for their nontraditional occupational roles — hence the disjunction between desirabilityand typicality for relaxed prescriptions. Men, by contrast,do not have competing role demands. The qualities society requires them to have as men are the ones they need to perform the roles they occupy. Therefore, they are under only one set of societal pressures, and demonstrate no disjunction between desirability and typicality.

In summary, a sustainable relationship has become a more complex and challenging matter in the 21st century (see also the interesting opinion by Bettina Arndt [3]).

There are no easy remedies for these challenges awaiting liberal societies. While those very liberal definitions of what we as a society constitute have enabled great benefits in the past and allowed us to break down some final frontiers for an equal society, it is questionable how long such liberal societies are able to prevail for the future. The higher the uncertainty, the stronger the pressure and the more disorientated people will become, the more likely they are in danger of falling prey to extremists, whose oppressive views may provide temporary bliss, peace of mind shift focus away from personal shortcomings, but whose goals will ultimately stand in opposition to our liberal foundations.

Maybe future liberal societies will need to set again more restrictive social conventions than our current ones. Forcing a sense of community and put less emphasis on the individual. But these are merely vague ideas and I might require another blog post to really draw them out.